WHY THE MEMORY of WALTER KRONKITE
must be treasured: 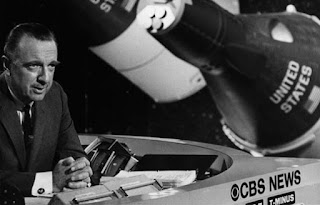 From the moment the media received word of Walter Cronkite’s death, every television station began replaying images of him spanning the many years he was considered to be the most respected journalist/anchorman here and abroad.

In each of the broadcasts, he was referred to as the man we all “trusted.” President Obama said Cronkite “was always more than just an anchor. He was someone we could trust to guide us through the most important issues of the day; a voice of certainty in an uncertain world. He was family. He invited us to believe in him, and he never let us down. This country has lost an icon and a dear friend, and he will be truly missed.”

Though few of us had the privilege of knowing him personally, we all felt as though we did. Looking directly at us through the lens of any camera, he reported every story in a way that we could all understand and thereby gave us hope and strength as he did so. There was no ego driving the man, no glossy TV “personality.” There was intelligence and a twinkle in his eye that let us know he was doing his job. His boundaries were clear, his style unencumbered, his language crisp and filled with the courage of a man who saw war up close and knew the game of politics but never betrayed a politician. He exemplified integrity and his forthrightness as an up-front witness to history in the making allowed us to be taken along for the ride in a way that made us feel we were with him wherever he was, seeing whatever he saw, feeling as passionately about the first trip to the moon and as shocked and saddened about the death of President Kennedy as he felt.

Some have referred to him as President Obama did during these past forty-eight hours – as an icon. I doubt that he would have agreed. He was too humble, too caught up in acting responsibly as he conveying the news – the facts as he knew them to be – without embellishment and/or any need to be revered. Respected, yes! But an icon? I don’t believe so.

That is exactly why the man and his work must be treasured. Those of us who grew up knowing his face and recognizing his voice remember the power that his honesty and intelligence wielded. When, for example, he told us that the war in Viet Nam would never be a victory, President Johnson was forced to accept the futility of further engagement, and the course of history was altered.

We owe it to Cronkite and to ourselves to treasure his memory and accomplishments, if we wish those who anchor the news to follow a standard of excellence. False idols abound. We need voices that report the news as he did, without bias or theatrics. Voices that will be heard as “voices of certainty in an uncertain world.”