HOW MANY RED FLAGS MUST WE SEE
TO PREVENT IMMINENT CATASTROPHE? 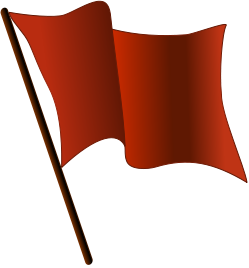 After Jared Lee Loughner went on a shooting rampage, killing 6 people, injuring others, and leaving Representative Gabrielle Gifford struggling to survive, we have a community and nation in shock yet once again.  Another seemingly senseless and perhaps avoidable tragedy has occurred.

There are political pundits who wish who make this week’s tragic incident in Tucson, Arizona into another reason for stricter gun control laws.  But gun control is not the major problem!  The compelling and tragic picture of our nation’s mental health system continues to fail proper scrutiny.

Loughner’s violent actions should not lead to a debate over gun laws, for as the National Rifle Association points out, “guns don’t kill people, people do.” However, even though I am not in favor of private citizens having guns, when taken literally, they are right.  As one journalist pointed out, “THE REAL SALUTION TO PREVENTING ATTACKS BY INDIVIDUALS IS TO REDUCE THE NUMBER OF DISTURBED INDIVIDUALS.”   A gun in a “disturbed” person’s hand IS a clear recipe for disaster.
Despite whatever set-backs and losses the current economy has caused, no loss can be greater than that of innocent human lives and the inattention to the care of the mentally ill among us whose behavior over time has displayed many red flags.  Despite the significant advances in treatments available for many mental and physical diseases, there is still a stigma that exists with regard to mental illness.  In many families, there is still shame, and that shame perpetuates inaction and keeping that member of the family out of sight and, therefore, not even eligible to receive help.  Then, there is denial even when what a family sees and hears from one of its members is bizarre and, at worst, potentially dangerous to himself and others.  Beyond that, the major problem that remains is that even when illness is recognized and not denied, and when behavors are seen as being abherent and in need of help, we can’t always provide the care, the facilities or the possibility for treatment and healing for all those who are suffering.

Dr. Keith Ablow, a forensic psychiatrist who has run community mental health centers, hospitals, and clinics, states: “I can tell you for sure, without any question, that the mental health care delivery system in this country is shoddy and shattered and without any hope at present of dealing effectively with sick individuals like Jared Lee Loughner, there are slim resources and no strategy whatsoever. That’s the very worrisome story behind this tragedy.”

In Newsweek’s article on “OUR BROKEN MENTAL-HEALTH SYSTEM, one sentence stands out:  “Thousands of anguished parents face a system that thwarts them at every turn.”

With regard to Loughner, we are reminded that there are countless unanswered questions about why he went on his rampage.  However, what is clear is that: “Across America are thousands of parents of older adolescents and young adults who are terrified that their child’s strange behavior, paranoid rants, drinking, drug abuse, conspiracy fantasies, and other red flags of mental illness will lead to violence – possibly against a public figure like Rep. Gabrielle Giffords, possibly against a family member.  That most of these parents have no idea what to do is frightening enough. It’s a national scandal that, even if they succeed in getting their child mental-health care before tragedy strikes” … it’s not in time to set the system in motion so that it will provide the best care needed for as many years as it is needed.   In short, the system presents a myriad of obstacles.

Michael Fitzpatrick, executive director of the National Alliance on Mental Illness (NAMI) is quoted as stating:  “The mental health care system in America is a broken system. The system was already in crisis, and has become even less accessible over the last three years as state budgets for mental health – psychiatric beds [in hospitals], counseling, and other services – have been cut by $2 billion.” NAMI’s Katrina Gay adds, “In many cases you can’t even get an evaluation for two or three months – and that’s assuming you know how to get one in the first place.”

Regarding Loughner, the obvious question is whether or not he could have been forcibly locked up before he committed his crimes. Yet, according to forensic psychiatrists, the answer is “not easily.”  But, surely, there were enough red flags leading several people to believe that he was a possible threat to himself and others.

Furthermore, this occurred in Arizona where, ironically, it is easier to commit a mentally ill person. Newsweek reports that the experts they consulted said they were highly skeptical he would have qualified. “Bizarre behavior isn’t enough.” The overall conclusion seemed to be that despite “hindsight bias that leads acquaintances to recall all sorts of warning signs…there’s only a fraction of the behavioral information that will come out…and it’s unlikely that even in Arizona it’s unlikely that courts would have committed him.”

Worse still, given the mental-health care in the country, “it’s unlikely that he would have stayed behind locked doors for long. Typically, hospitals and other facilities stabilize a patient, give him medications, watch him for a couple of days and, if he seems functional and non-delusional, send him on his way.”

In a personal plea, one of the most compelling articles I read during these past few days was submitted to Linkedin.com by Ed Kirby of Nashua, New Hampshire. With a family member suffering from mental illness, Kirby’s sympathetic and intelligent request gets to the heart of the matter better than most, and we feel it in the very title of his article:  LET US COME TOGETHER TO TREAT MENTAL ILLNESS.

Though I recommend reading his entire post, I will leave you with what he (and I) believe to be most important: “When warning signs of brain disorders do not produce the proper responses from medical providers, symptoms can escalate to bizarre acts of desperation such as suicide or even on rare occasions homicide. Emergency rooms and prisons provide temporary lock up at further high cost to society… The question should not be: What police interventions have occurred,” but rather, “What mental health interventions have been made available to him and his family?”

Contrary to modern scientific advances and the progress in understanding the origins of some diseases, attitudes toward the mentally ill still remain fraught with misunderstanding, shame, denial, and a deep-seated unwillingness to get those who happen to be victims of their mental wiring to receive the help they deserve and to become integrated members of society.  Sheepishly, we as a nation, place our priorities elsewhere.

To quote Kirby further: “Those afflicted with brain disorders do not choose to “lose their minds.” Society, families, and individuals – victims on both sides of this equation – can be spared by the existence of, and the unencumbered access to, quality mental health care.

“We must all come together, seek knowledge of the disease, provide funding and support programs so that those in need will receive treatment …”

I would add that we must all come together to help prevent such heart-breaking tragedies as the one in Tucson and others that have preceded it.

For after all that has been revealed thus far about Loughner, the red flags were there for anyone to see.   Bizarre behavior was exhibited in his classes. Fellow students voiced fear that he would bring a gun to school.  And going on anti-government rants about United States currency was also known about him within his community. Yet, rather than remanding evaluation and treatment, he was simply expelled from his Community College.  Merely recommending help fell short of a remedy, just as not being accepted by the military accomplished nothing positive.

His behavior, his words – bizarre as they may have been – were not enough for anyone to take the sort of action that would have protected him from himself and others.  Removing him was simply easier.

However, what is easier did not and will not provide a healthier and safer nation.  We must have the ability to identify and offer proper treatment for those among us who are mentally ill.  Such actions will better define who we are as a people, our priorities, what we value, and our pledge to remain a civilized nation.

I don’t think we can afford to look at this tragedy without devoting ourselves to a fight for anything but what it is:  THE NEED TO PRIORITIZE THE PROTECTION OF THE MENTALLY ILL SO THAT THEY WILL NOT HARM OR KILL THEMSELVES OR, WORSE YET, HARM OR KILL OTHERS.  AT BEST, THEY WILL BE HELPED TO BECOME HEALTHIER AND MORE INTEGRATED MEMBERS OF SOCIETY, AND WE, AS A PEOPLE, WILL BE ABLE TO TAKE PRIDE IN SUCH AN ACHIEVEMENT.

Do share your thoughts with me on this subject.

Yours,
Linda
*Visit my website at www.applemanshapiro.com to learn more about my psychotherapy practice, my work as an oral historian and my book, FOUR ROOMS, UPSTAIRS, which may be ordered directly from the site with no cost for shipping.