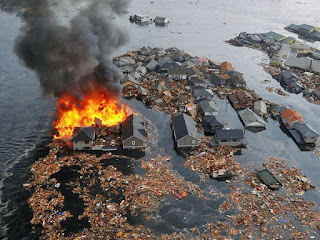 There are traumas and there are TRAUMAS!  None is ever pleasant nor easy to overcome – but when everything one owns and everyone one loves is threatened by a natural disaster such as the earthquake/tsunami which occurred and continues to impact on the lives of everyone in Japan – there are no words to describe the devastation, no meaningful expressions of sympathy for those lost, missing, or dead.  With homes and businesses destroyed and after shocks continuing to rumble and tumble the insides and outsides of all that was familiar one moment and gone the next, how is anyone to cope?


So many of us throughout the world have been viewing what happened almost from the moment the quake occurred.  With other recent natural disasters, along with acts of terrorism, such images remain forever in our heads, leaving us more conscious of our own vulnerabilities.  For those of you such as myself, with relatives or friends in Japan now, the nightmare is even greater.

My dearest nephew Marc, along with his wife Shari, their youngest son Drew (and many members of Shari’s family) left the States Wednesday for a long planned vacation to Japan.  And though they arrived in Tokyo just prior to the quake and afterwards did e-mail to say that they felt relatively safe, I am more than merely eager for them to return home.

As of this writing, we do not know exactly when that will be possible.

For them, the experience will, no doubt, be life-altering.  For the entire country of Japan and its citizens, though, this experience will be a trauma from which it will be nearly impossible to recover.  Being safe one moment and then having the floor beneath them shake and the building or home they were in sway with sounds of impending doom, had to have been nothing short of utterly terrifying.   Then, too, there is the threat now of waiting to learn if any or some parts of the country have been exposed to what indeed may turn out to be the world’s worst nuclear disaster.  That in itself may not only be threatening but immobilizing.

Since the 911 terrorist attack and natural disasters such as Katrina, we here in the States have all felt less smug about what is in our power, less certain of anything we think is in our control, and certainly less confident in the future of the world as we know it.

On the positive side, such catastrophes often bring out the best in people.  Average citizens are already working to send aid and scientific experts are offering to help figure out exactly what happened as well as how best to control what is happening and what might happen again.  Physicians and numbers of health care providers are also volunteering to assist.  Not least of all, leaders of nations, 50 including the United States, have offered to extend help to Japan.

However, in the words of an American reporter living in Tokyo for many years, this is Japan’s moment for transparency in its actions.  Acknowledging their need and willingness to accept help, to disclose ALL that they know to all of their citizens is of the utmost importance, if their people are to have any trust in their government and any hope for survival.

Such disclosure is akin to an individual’s acknowledgment of pain and willingness to seek help rather than keeping his life’s struggle a secret.  Just as with a dysfunctional family, secrets only breed dis-ease and confusion, if not mental illness.  So, too, with nations!  Japan, therefore, has the opportunity – if not the responsibility – to report honestly to its people and to the world.  Making decisions based on the most sophisticated knowledge they can receive from any countries willing to offer their expertise and assistance at this perilous time is obviously essential.  In the end, it will be more than beneficial.  It is the honorable way to save themselves and show the world they are capable of doing what is both expedient and noble.

For the most part, however, no one else can truly experience the after-effects of another person’s (or another nation’s) response to a traumatizing event.   Each of us has different resources to draw upon when tragedy strikes.  Some of us have few, if any.  And although our sorrow remains always and forever our own, no matter how rich or poor we are or whatever part of the world we may live in, that sorrow can be made easier to bear when others offer us their help.

Obviously, there are differences between personal traumas and global ones.  The nature of how they affect our psyche and our soma can be equally devastating, but they are different, nonetheless.

As a survivor of a personal trauma – namely my mother’s bouts with mental illness and its effect on each member of our family – what’s happening now in Japan reminds me of a chapter in my memoir FOUR ROOMS, UPSTAIRS, in which I wrote about my mother’s suffering the after-effects of being a child in war-torn Russia during WWI.

“The turmoil of mother’s internal world was later hidden behind what appeared to be a stubborn reluctance and lack of desire to see more, to visit new places. Early imprinting, which had adhered trauma to change, had also kept her wary of travel, even when she could do so in comfort years later.  Staying with what was familiar, she remained confined, a prisoner in her four rooms, living in a tiny slit of space she assumed to be her only choice ….. venturing out was not an option.  There was no going beyond where fear had paralyzed her and memory still held her in its grip. ….. Reminders of the sadness that filled our four rooms haunted me for years.  Shadows from [Mother’s] past darkened the present, as the constant fear from living with real or imagined danger fed a growing anxiety.  Even when life was relatively calm, it still felt as though a storm was looming.”

I wrote those words because my mother’s traumatic memories created traumas of my own.

Now, in this surreal time when Japan’s toll on human life is staggering and the country’s infra-structure may indeed be forever altered, I can only hope and pray that all who are in various states of shock – trapped, injured, or separated from their loved ones – will survive and WILL be offered the possibility for healing, re-building, and re-creating , not just themselves but their nation.

*Visit my website at http://www.applemanshapiro.com/ to learn more about my psychotherapy practice, my work as an addictions counselor and oral historian and my book, which may be ordered directly from the site with no fee for mailing.